Time to Perfection – The Later in Life Marriage 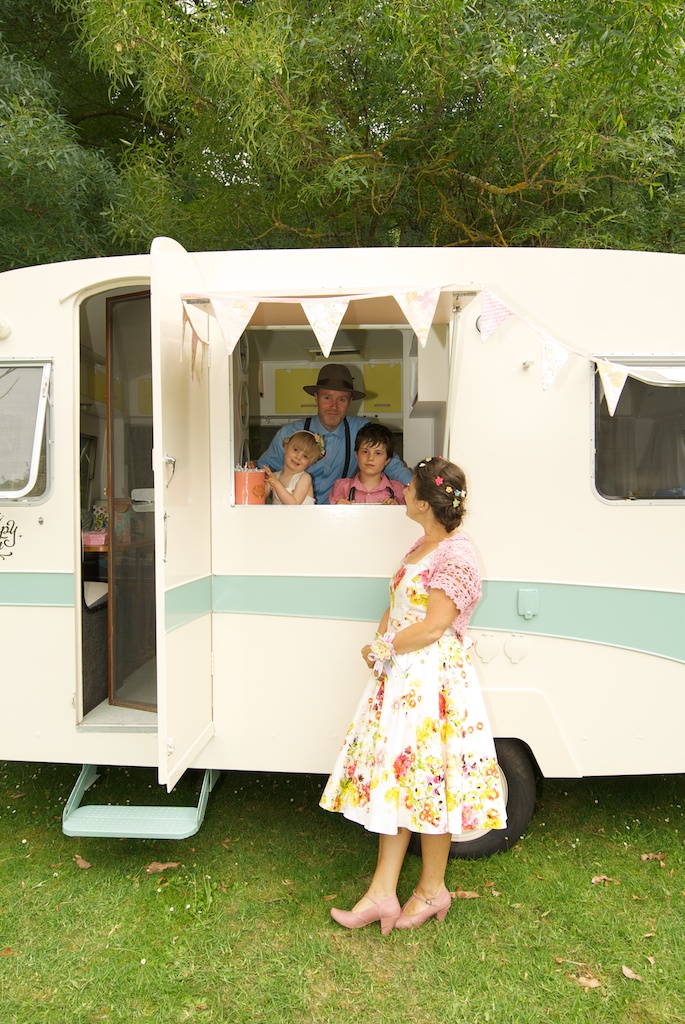 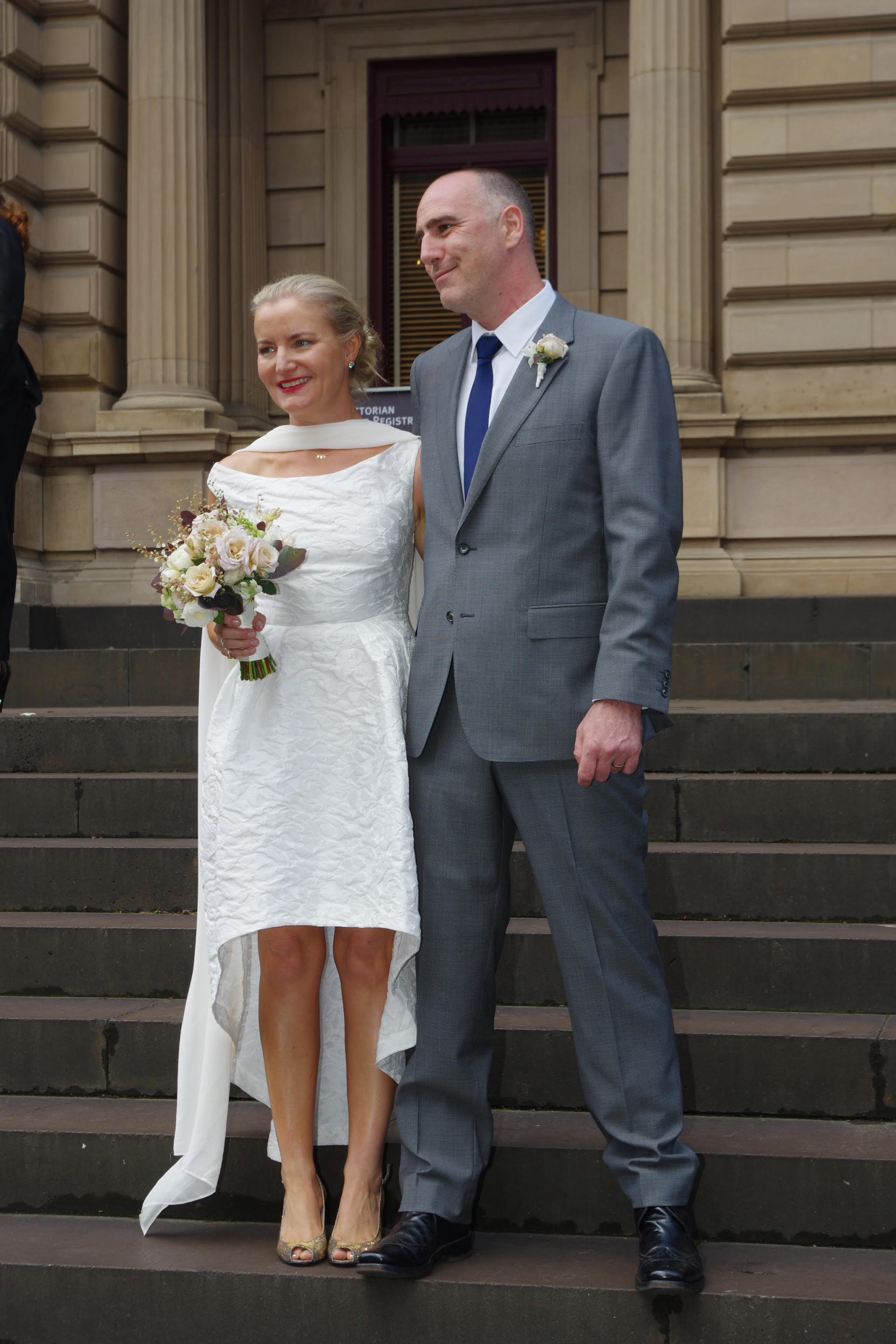 Caroline simply had no choice but to say ‘yes’ to Stewart. How else, after all, was he supposed to stay in the country? But this is more than just the story of a fella in need of a visa. When the big day came, standing in his fineries on the elegant steps of the Victorian Treasury Building, Stewart caught sight of the woman who was soon be his beautiful bride. Turning to his mum – who’d come all the way from England for the big event – all he could manage was, “Look at her, Mum, just…look at her,” before bursting into tears.

Stewart and Caroline’s story ranges over several decades, from when they first got together when Stewart came to these shores in his twenties, to the relationship winding up upon his return to London. Caroline’s first marriage, a son, and then a divorce intervened, until a Facebook reconnection with long-lost Stewart led to a holiday with friends past and present at a cottage in Burgundy, and the rekindling of a fire that one suspects had never quite gone out in the first place. “Things went well,” is all Caroline says.

All the ingredients of a Rom Com right there, you might say, minus perhaps the proposal, delivered by Stewart down the phone from London a few weeks later. “So, Caroline, I really want to be with you,” he popped, “but my Australian residency has expired – so we’ll have to get married. How about it?”

How was the girl to resist? Luckily for him he still had his East London accent.

“We had to get married,” says Stewart, “but luckily we wanted to anyway.” Stewart freely confesses his surprise at the depth of emotion that overwhelmed him on the day. Later this year, he’ll take part in another ceremony, that of his Australian citizenship. He might find himself surprised by that one, too. 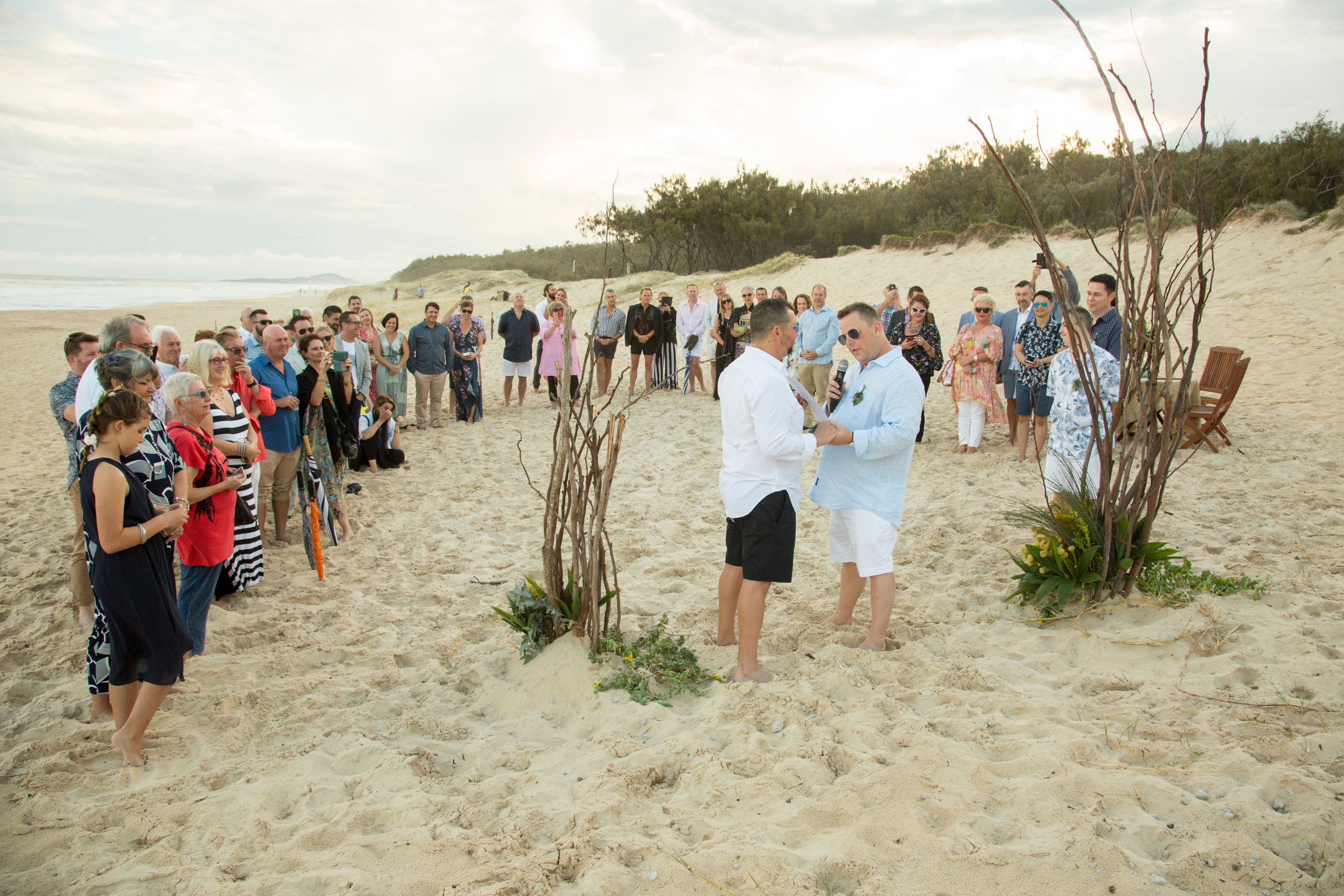 Pete and Nate’s big day was picture perfect: surrounded by a hundred or more family and friends at the Western Oval – home to their beloved Bulldogs – a beautiful, sunshine-bathed ceremony morphed into a party where kids both young and old celebrated, and kicked the footy around the hallowed turf. In the evening the big lights were turned on, allowing the fun to continue well into the night.

As joyous event as it was however, at the end of the day Pete and Nate were not a single step closer to actually being married. This was simply their ‘affirmation ceremony’ – a purely civil affair or, as Pete puts it, “our very expensive engagement party”. For it to be legal, they would have to wait another two years for the law to change when Australia finally staggered – exhausted and punch-drunk – over the threshold of marriage equality to bring it into line with most comparable western nations.

Like many people lucky enough to grow up in a large and loving family, Pete’s view of marriage was a happy one. For forty years until his father died, his parents were devoted to one another, and he can barely remember a harsh word passing between them. As positive as his view of marriage was, however, it was an institution from which he was, for decades, barred.

When Pete and Nate were finally able to officially marry, there was no question they wouldn’t do it all again. “I’d spent so long fighting and being angry about not being able to be married,” says Pete. “Now that we could, we simply had to. All I ever wanted was to walk in the street holding my partner’s hand, and for us to be able to legally refer to one another as ‘my husband’.”

Second time around, the setting had moved to a beach in Noosa and the weather was not quite so kind. It was, however, on the very day of Pete’s fiftieth birthday, and the party was just as good, marking both an end, and a beginning of a journey for them both. 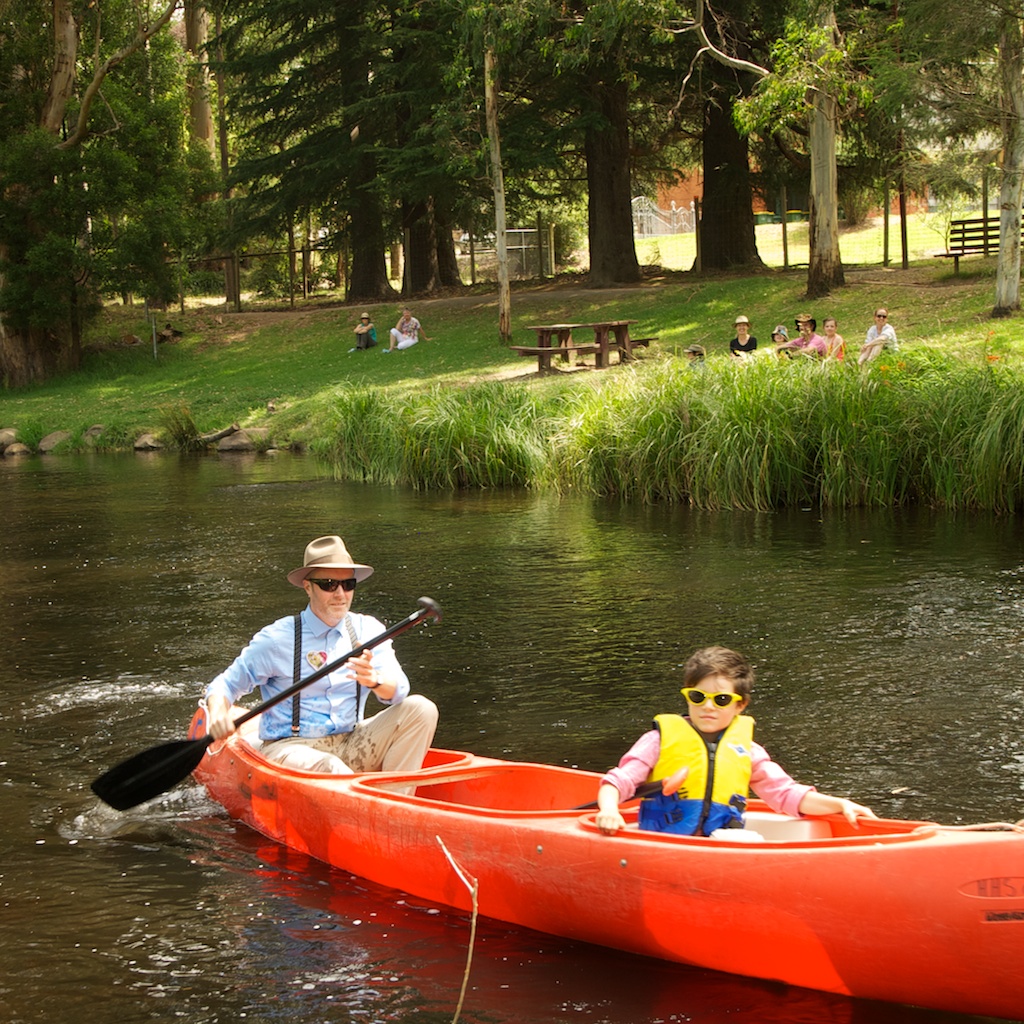 Having survived well into his forties without ever managing to tie the knot, Michael wanted to arrive at his own wedding in style. In a flash of retro-styled inspiration therefore, he hit upon emerging – a la James Bond in ‘Thunderball’ – from the deep, replete with scuba gear, before making his way up the riverbank through his astonished guests to stand beside Le, his partner of ten years and now bride. Practicalities however, have a habit of intervening, and although his beloved would have undoubtedly swooned at the sight of her dripping aquanaut groom, it probably wouldn’t be for the right reasons. The upper Yarra River at Warburton isn’t, after all, the Caribbean, and in summer it’s not even all that deep. So, keeping to the theme, a down river arrival by canoe was decided upon, and it all went, well, swimmingly. Michael’s feet even remained dry for his and Le’s beautiful afternoon in the mountains.

Unlike Michael, Le had been through it all before, when she was first married in her twenties. Back then though, it was as much, as she puts it, ‘an identity thing’.

Twenty or so years later however, it was all about her two children, and a celebration of life in general. “Being older”, says Le, “we were much more relaxed about it. I feel I got it right – the second time”. And cheaper too, with friends, family and favours called in to help with the catering. “We had about 120 happy and well fed and watered guests for around five thousand dollars”, she says.“It was a genuine hand-made fiesta!”

Who says a good time has to be expensive? 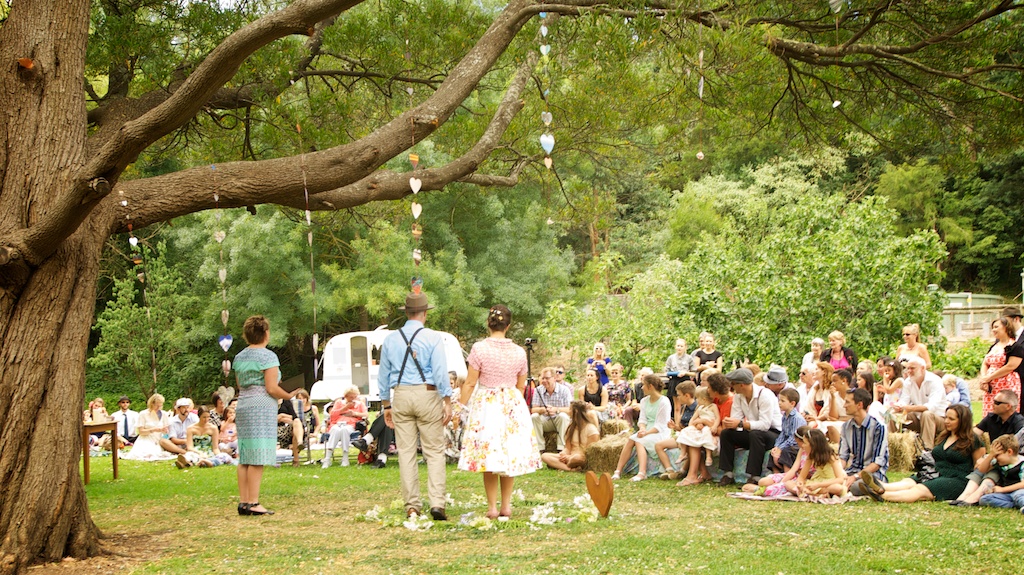 Three weddings of three couples who all, for differing reasons decided to marry after forty. And by the stories they tell, and the memories they now cherish, it seems to have been the perfect time to do so.

Jogiya Falguni (Flower) and James Mitchell A colourful three day wedding in Warburton celebrates multi-cultural love and the bringing together of what really matters. {“preview_thumbnail”:”/sites/default/files/styles/video_embed_wysiwyg_preview/public/video_thumbnails/346763159.jpg?itok=5b-Dg0vN”,”video_url”:”https://vimeo.com/346763159/fc5cfda241″,”settings”:{“responsive”:1,”width”:”854″,”height”:”480″,”autoplay”:0},”settings_summary”:[“Embedded Video (Responsive).”]} (Video by Wildbird Films) Meet the couple James and Flower both work in the sales industry, James as a cybersecurity expert and Flower as a dental supplies specialist. END_OF_DOCUMENT_TOKEN_TO_BE_REPLACED

The blossoms are in full bloom and there’s a hint of warmth in the air. Throughout the vineyards tiny shoots of green are the beginning of the next vintage and in the gardens, the spring bulbs are peering through the soil ready to show off in a magnificent display of colour and life. In the END_OF_DOCUMENT_TOKEN_TO_BE_REPLACED

How Sweet (or Savoury) Love Is: Alternate Wedding Cakes

​ While wedding cakes are an iconic part of a wedding, couples are breaking tradition by serving alternative dessert options for their big celebration.  Not a sweet tooth or just not a cake fan? There’s still plenty of ways to serve a crowd-pleasing dessert without serving an actual cake. Particularly over the last few years, END_OF_DOCUMENT_TOKEN_TO_BE_REPLACED